Writing to the Music by John Tristan

Like all of my stories, THE ASSISTANT has a secret octane booster in its engine: a soundtrack.

When I get an idea for a story, sometimes – not always, but a good half of the time – it feels very cinematic. I get a few flashes of images, laid out like movie clips. I get a sense of the feel of the story through that mental cinematography, whether it’s all warm tones and shadows, or deep blacks and neon blues. Eventually, those flashes get a soundtrack. I’ll be listening to music, on a tram into work or before falling asleep at night, and suddenly a song will link up with those story-flashes. Either the music, or the lyrics, or both, will make me sit up and go “holy shit, this could have been written about X or Y”.

Once I’m actually starting to write, when those flashes start becoming a coherent story (more or less), I end up putting together a playlist. The first songs on it are always those spontaneous “holy shit” songs that seem as if they’re made for the story I’m writing, and then I add more that carry on the same feel. It tends to be a mix of old favorites and songs I’d never heard before; every soundtrack I make exposes me to at least one new artist. 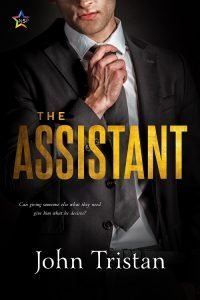 Oddly enough, the soundtracks almost always correspond in length to the story itself. THE ASSISTANT’S soundtrack (https://great.dj/theassistant/), coming in at eight songs, feels just about right. Add in some original score (hey, let me dream a little) and it’s just the right amount of music for, say, a 90-minute movie. The slinky guitar of Arctic Monkeys “Do I Wanna Know?” echoes out of the bar that Nick is working as a bouncer for; Annie Lennox’s “The Gift” starts as the final credits roll.

Though I used to make a fair amount of fanmixes, making a soundtrack for an original work, an unwritten work, is something very different. It’s almost a way of outlining for me, actually.  I’ve never been much of an outliner, at least not in any kind of detail; I prefer to have a vague idea of a story’s shape before I write it, but that’s all. I like having the fun of discovering it as I write it. But then, I don’t like flailing in the dark completely  either. Making the soundtrack helps me figure out the mood I’m going for, the major emotional beats, and the rough length of the story, whether it’s a tight little EP or a double-album monster.

I’m working on two new projects at the moment, with two soundtracks to write to. One is mostly instrumental, cool synthwave and soaring post-rock, and a tidy nine songs long. The other is a sprawling 22-song gallop through power metal, stadium rock, and folk ballads about dying for the one you love. They’re shaping up to be very different stories, but I already knew that, from the moment they started playing their soundtracks in my head.